Where Lies Confidence and Motivation?

I’ve been doing A LOT of thinking about this relationship lately…  the relationship between Canine Olfaction, Ethology and Learning Theory….  In fact it’s partly the basis for my new class NW340 The Four Cornerstones of Trial Preparation. 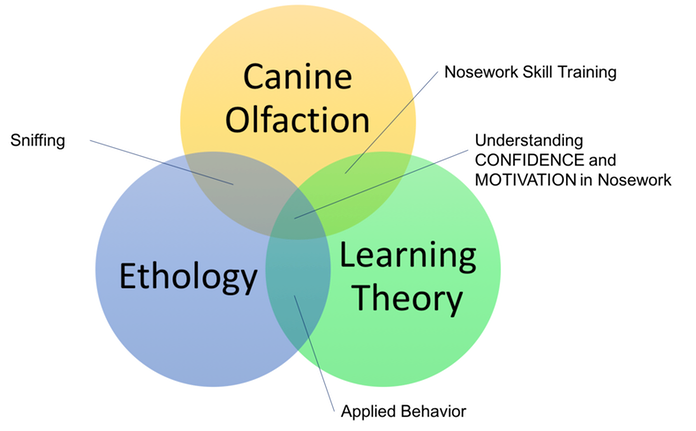 Between Canine Olfaction and Ethology we have “sniffing”….  Sniffing is a self soothing behavior that dogs exhibit when stressed or when interested in their environment.  This is sniffing that dogs do naturally or in response to his environment.  Perhaps he smells a dog in heat?  Or perhaps there is just a chipmunk nearby.  This type of sniffing is the bane of many an Obedience competitor and I would classify this type of sniffing as “non-productive” sniffing.

The relationship between Ethology and Learning Theory is Applied Behavior.  It’s in this intersection that Behavior Specialists change and influence canine behavior in order to help the dog with coping skills and the ability to live peaceably in society.

Nosework exists in a couple of these intersections.  Between Canine Olfaction and Learning Theory, we have Nosework skill training.  We might be training converging odor, elevation or perhaps just getting to source!  When a lot of people think about “foundations”, skills training pop into their minds.

The real power though is where all three of these spheres come together…  this is where REAL foundations are created.  In this intersection we understand Confidence and Motivation.  These are two aspects commonly missed in foundation training.  Good trainers will incorporate these aspects into their training program. 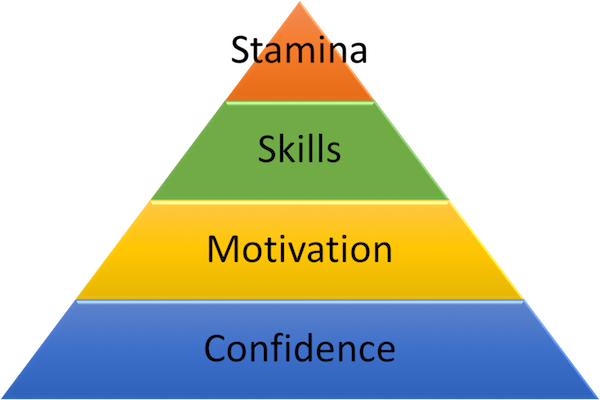 The Four Cornerstones are CONFIDENCE, MOTIVATION, SKILLS and STAMINA.  I purposely present these as a pyramid because foundations are built in Confidence and Motivation.

Let’s go back to the first diagram.  Because of how these three circles come together we can see that Nosework is sniffing with therapeutic intent.  It’s the gateway between displacement sniffing and productive sniffing.  Through productive sniffing, the dog learns to feel like Superman and confidence is developed.  This in turn has an overall therapeutic quality for the dog increasing overall confidence.  Amazing, isn’t it?

Learning Theory plays a part because of the Classical and Operant Conditioning that occurs with Nosework training.  We provide clarity, incentive and reward and our dogs in turn search for a target odor.  Because the scent receptors in the canine brain go through the hippocampus and the amygdala in the brain, we are able to evoke intense and pleasant emotions with regards to the sport and to target odor.  These pleasant responses, in the form of positive Conditioned Emotional Responses (CER), are what make this sport so wonderful for each and every dog.  It allows them to transcend sniffing and to grow and thrive.  THIS.  THIS is why Nosework is for every dog.