The Importance of Training with Varying Amounts of Odor

In training the sport detection dog, we often look to professional corollaries for guidance.  One of the often overlooked aspects is strength of odor.  Instead, we debate with each other about how much oil to use in preparing our Qtips and how many swabs to use.  If we look to the professional detection world, we will quickly find out how silly these debates really are!

As a perpetual student, I am constantly studying.  In this case, I’d like to share an excerpt from a handbook I have in my library, “Problem Solving of Narcotic Detection K9’s” by Jim Hornbeck.  Chapter 17 is focused on dogs who will not alert on a large amount of drugs.

Dogs are easy to condition.  If you train on only small amounts of drugs, then that is what your dog will be conditioned to alert on, even  in the street.  Be sure to have a large amount of drugs available that you can train on occasionally so that your dog knows to search for all amounts of the drug odor.  Many times, with extremely large amounts, the dog will act very differently because he knows that he needs to alert somewhere; but because of the large amount of odor, he doesn’t know where to alert.

He continues with the following passage:

The same goes for HRD dogs.  They train not only on teeth but also torsos!  A little macabre perhaps but the result is a highly effective search dog.

So instead of arguing whether to use trace amounts of essential oil or 2 drops per Qtip, remember that it’s important to do BOTH!  In fact, when I teach my in person classes I often place both strong and trace odors out in the same search.  Some of my odor is faint and very old and some is very strong.  By training on both, the dogs become multi-dimensional and truly capable of working to source. 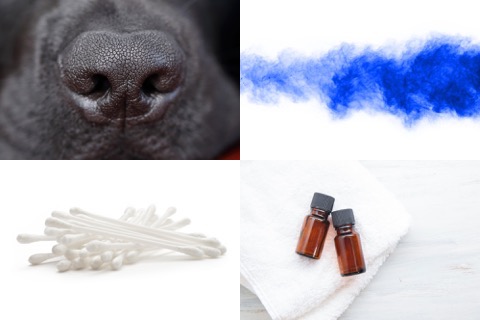 If we don’t train on different concentrations, we end up with a dog who believes not that he’s supposed to work to source, but rather than he is supposed to only alert on a particular concentration.  That’s a recipe for a fringe alert!  You will also train a dog who struggles with pooling odor.

And think about the skills necessary for this type of search!  Working multiple hides with multiple concentrations means that the dog learns to work to source  for EACH of the hides, regardless of the odor strength.  THAT is odor obedience!  Do this and you will successfully trial in ALL venues.  And the point  of sport detection is really to get out there and play with our dogs, right?