Ahhh…. the elusive CHANGE OF BEHAVIOR…. it’s one of those phrases that gets thrown aroud loosey-goosey in Nosework.  Recognizing it is akin to breaking the glass ceiling for novice handlers. 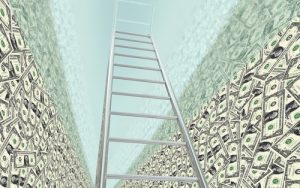 I’ve also found that one of the keys to instruction is communicating HOW to read a Change of Behavior.

Without the Change of Behavior, we are stuck relying on that unreliable Final Response…. which can easily go this way….  The Dog looks back at the handler ~ handler calls Alert ~ Judge says NO!!  Why?  Because there are a million and one reasons why a dog might look at his handler!  Knowing what to call comes down to reading COB’s.

95% of the dog’s communication occurs PRIOR to the final response.  Without knowing this language, we are prisoners of the final 5% (which may get even more subtle in a trial situation).

One of the first recognizable Changes of Behavior is the “head snap”.  It’s an obvious one because the dog is quite literally stopped in his tracks and goes “WHOA!!!  ODOR!!”  The Head Snap is the canine approximation of a neon bar sign.  It’s not subtle in the least.  Unfortunately for many handlers, I’ve found that reading beyond the Head Snap and the Final Reponse is problematic.

Because I teach online I’ve had the opportunity to review literally thousands of videos of hundreds of different dogs.  This not only makes me quite savvy when it comes to YouTube but it also has given me an eye for really reading a dog.  My favorite pasttime is observation…  it’s in looking for trends and commonalities.  This observation has yielded new clarity into the vagueness of the term Change of Behavior.

There are in fact THREE types of Change of Behavior!  In many searches, you will observe all three as they tend to happen sequentially (however not all three have to happen in every search).

When dogs get into odor, you will frequently see them speed up (or sometimes slow down!).  The dog will be searching along and then seemingly beeline to an area.  This means your dog is in odor!  It doesn’t mean that the dog is at source…  however, it does mean that your dog is ready to narrow down the location.

This is perhaps the most obvious type of Change of Behavior.  A Change of Direction can be as simple as a head snap or as drastic as a physical 180 degree turn.  This occurs when the dog passes by odor and notices the the odor once downwind of the hide.

A change of focus can be the most subtle type of Change of Behavior.  In a change of focus, the dog goes from scanning the area to actively sourcing a hide.

Let’s take a look at some searches.  What changes of behavior do you see before the alert is called?

Here’s a NW3 search being performed by Joey.  Joey is what I call a “wind dog” meaning he LOVES catching bits of odor on the wind and chasing them.

Now let’s look at the first hide based on changes of behavior.

How about this search?  This search is dominated by Change of Focus.  Do you see it?

Reading your dog is an art…. it’s developed over time…. However, the more we can break it down to a science and become true OBSERVERS, the more successful we will become.