Sometimes we have to say THANKS…

Here we are, in another holiday season.  The year is wrapping up.  And in many ways it’s time to give thanks.

Tonight I want to dedicate this blog to the most incredible creature ever to grace my life.  Judd.  ARCHMX JB Windjammer BN RA ASCA TD ELT-CH SWA RATO.  Alphabet soup…. lol. It just means that Judd and I perused Rally, Obedience, Agility, Barn Hunt and Tracking before settling on the most amazing of all dog sports…. Nosework (or Scent Work depending on the venue).  Competition Scent Detection…. the most consummate of all dog sports.  Looking at that string of letters it would be easy to assume that Judd is a fancy bred dog or at least possibly started at a puppy, groomed to be a Sports Dog.  No.  That actually couldn’t be farther from the truth!  But I digress…. we will get to that!

When I went to class tonight to teach, a very close friend gave me a Christmas gift that I will always treasure… it’s a personalized ribbon hanger with the phrase “The Joy is in the Journey” transcribed on it including “Judd SWN” (SWN is AKC Scent Work Novice).  It was meant to display the ribbons that Judd earned at Eukanuba this year in order to get me to remove them off of my dining room light fixture!

So I hung the ribbons.. and then decided to hang a few more special momentos from 2017.  2017 was a special year for Judd and me.  He earned NACSW ELT-CH (Elite Champion) as the first Labrador in the country to achieve this title.  He then moved on to compete in the 1st annual Eukanuba Performance Games earning 2nd Overall out of 50 dogs after winning High in Trial on the second day.  Fast forward to November, he competed at the 2017 NACSW National Invitational earning a 1st in C-Barn and a 2nd in Stroh’s Pillars out of 46 dogs competing. 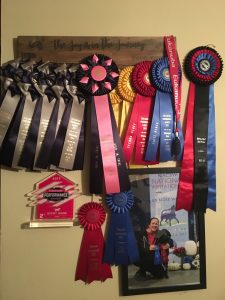 Then I got to reminiscing about what brought me to this spot.

6 years ago I put in an application with Lulu’s Rescue out of PA for a yellow Labrador named Annie.  She sounded exactly like what I wanted and I thought she might be a good match with Joey, my then 4 year old Standard Poodle.  When Jane Zeolla (the very same Jane Zeolla from the book “Little Boy Blue”) contacted me, she said, “Annie needs to go to a home with kids.  But Judd is your dog”.  My response was “Who is Judd?”

Judd as it turns out was pulled out of a high kill gassing shelter in North Carolina.  Something pulled at Jane and convinced her to believe in him and rescue him.

After meeting him (twice) I thought he might be a good fit in my home!

Here’s the day he came into my home and my heart: 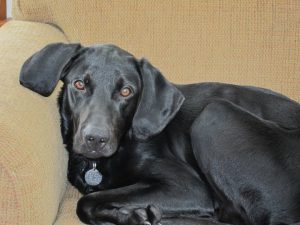 We started training All The Sports and ended up at Fenzi Dog Sports Academy working with Denise Fenzi and Nancy Little in the second ever term of FDSA in the Obedience Problem Solving class.  We were working on Go Outs!

Judd stressed in competition in Rally, Obedience and Agility.  However later hinted to me that he liked using his nose earning an Tracking Dog title with ASCA after only 6 weeks of classes! 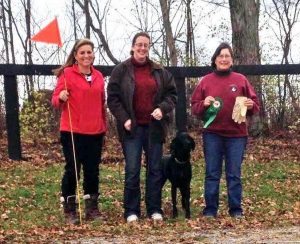 Fast forward, Judd and I tried a newer scent sport called “Nose Work” and he was smitten.  So was I! 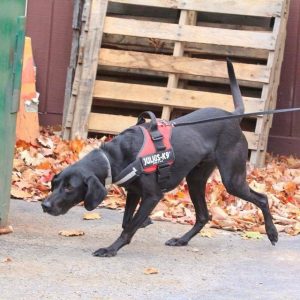 Moving on to NW2 (one month after his NW1 title) in Easton PA: 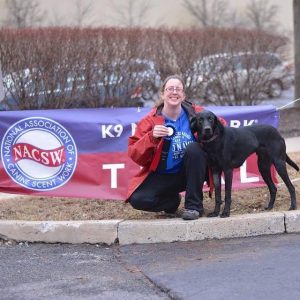 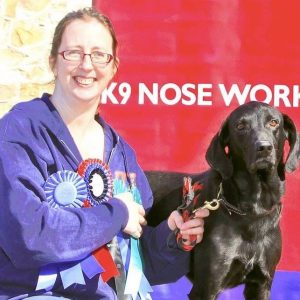 Then a Second NW3 title in Huntington MA: 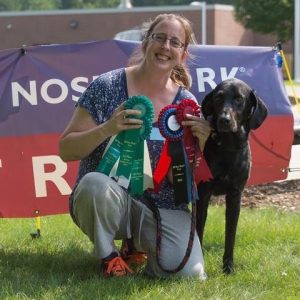 And a Third NW3 earning him NW3 Elite only 13 months after his NW1: 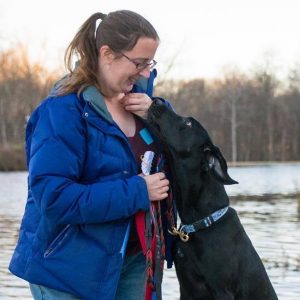 Moving on to Elite Division…. ELT1 (with a score of 90.48 clinching his spot at the 2017 NACSW National Invitational: 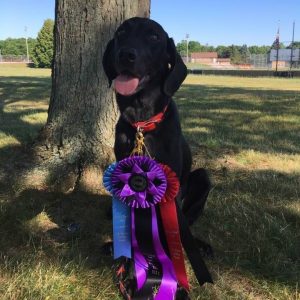 And ELT2. The first Labrador to achieve this title!:

On to ELT3…. this time traveling all the way to Oklahoma! He was the second dog in the country to achieve this title : 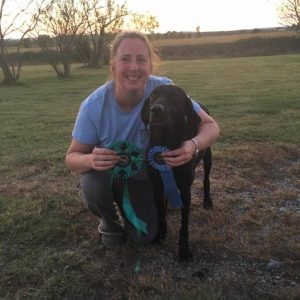 And finally earning ELT-CH (Elite Champion) becoming the 1st Labrador in the country to achieve this title and one of the first dozen or so dogs in the country: 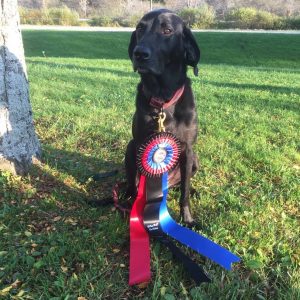 Ah…. but his story continued!

He was lucky enough to get into the 1st Annual Eukanuba Performance Games and the Inaugural AKC Scent Work trial.  He not only finished his Scent Work Novice title but he won High in Trial on the second day.  This allowed him to compete in the Championshiop Round on Sunday where he won 2nd Overall (out of 50 dogs total): 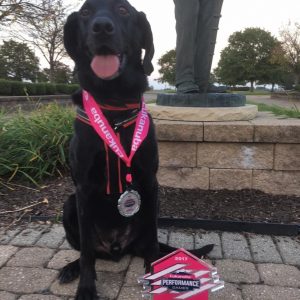 Fast forward to November this year…. we competed at the 2017 NACSW National Invitational.  He won the C-Barn search and was 2nd in Stroh’s Pillars.  More importantly we had the time of our lives and built so many memories that will last a lifetime! 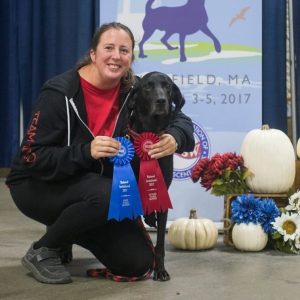 Here he is alerting on a high hide in his Stroh Pillar search! 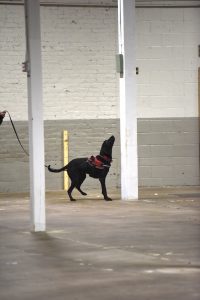 His whole Stroh Pillar search can be seen here:

What a good boy….

But you know what?  It’s not just about the ribbons…. He has affected me in ways I can barely express adequately…

This time last year I was struggling with anxiety.  My job was crushing me.  I was working in my third Fortune 100 company in a high pressure job.

I ended up having to train Judd as a Service Dog.  He would perform Deep Pressure Therapy, stopping anxiety attacks in their track.  He started going to work with me in his new job. 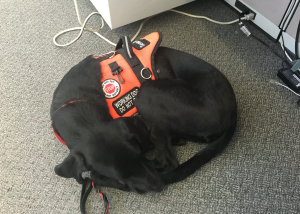 Eventually I was no longer able to perform in my job.  It was a sad and stressful time for me.  However, usually in life as one door closes another opens.  In this case, I was able to start teaching full-time and was really able to get Scentsabilities Nosework off the ground… (I had already been teaching at FDSA for a couple of years).  All of this is much in part (ok, mostly) due to this amazing dog.  He no longer needs to perform his SD duties… although he has retained his ability to do a generalized retrieve and hold! 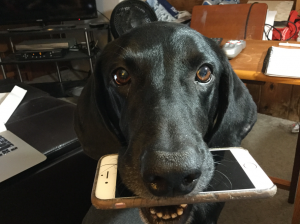 Now Judd is looking forward to his next endeavors in Competition Scent Detection and is additionally helping to train the puppy, Brava, who is following in his footsteps.  Judd is a loving, patient big brother! 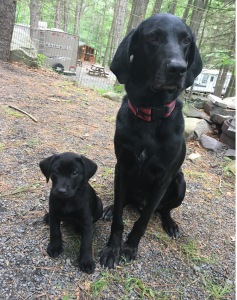 Going back to the ribbon hanger, inscribed with “The Joy is in the Journey”…. the memories it brings up…. they are emotional and powerful.  And in the end I truly know that I have a dog-of-a-lifetime…. one of the True Greats.

What makes a great dog if not their influence on our lives?  With Judd I am truly grateful.  And I am grateful to everyone who has been on this journey with me.

Judd honey, I love you with every bit of my soul!  You’re not a Heart Dog…. you’re a Soul Dog.  Thank you for being the very best dog and the very best of friends.

To all who are reading this, be thankful.  This is the time of year to look back and pay attention to what these amazing creatures have done for us and how they have influenced our lives.  They are truly Awesome in every meaning of the word.