At some point, one of our partners will likely get injured or have a medical issue that keeps him/her out of competition, kind of like my Miniature American Shepherd, “Why”…  who I got as an agility prospect.  Well about a thousand dollars later and more tears that I care to admit, the Iliopsoas issue now seems to be resolved, however his idiopathic epilepsy will keep him from agility for good.  Why isn’t alone.  Dog sports and even just play, brings with it dangers of injury.  So what do you do with a dog who is used to being active but is now required to rest?  Their need for an outlet doesn’t go away and for many of these dogs, being active is a way of life.  There is a Miracle Pill…  and it’s called Nosework. 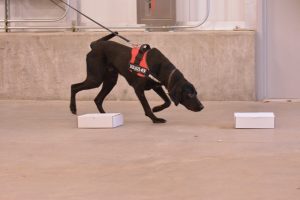 Some people suggest puzzle toys for our laid up friends.  That’s a great idea for a very short amount of time.  It’s stimulating but does it truly satisfy the need to work an active brain?  Olfaction on the other hand tires a dog out.  1/8th of the canine brain is dedicated to olfaction.  Sniffing will mentally wear out a dog, whether healthy or infirm.  Sniffing can be done while on crate rest.

The other beautiful thing about scent work is that it’s highly stimulating for a dog.  We live through our eyes and ears.  When we have the occasional sick day we may stay in bed and read a book or watch TV.  Dogs are highly intelligent creatures and still need mental stimulation when they are laid up.  Dogs smell with comparable detail to how we see.  Their olfaction is complicated and smells give the dogs a story.  Scenting to a dog is like reading a book for us.

Nosework, especially the introductory levels, is not aerobic.  At most it requires a little walking on leash.  Most injured dogs are relegated to leash walks anyway!  With the mental stimulation satisfied, the need for physical stimulation lessens to a degree.  Mental stimulation can help to quiet the minds of our injured friends and makes crate rest or other restricted activity much more bearable. 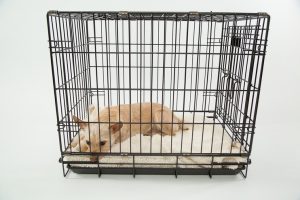 Many dog owners are turning to Nosework as a solution:

Winston had TPLO surgery for cruciate repair. The standard crate rest for post-op recovery for this procedure is 4 weeks. Prior to surgery Winston was involved in agility, barn hunt, obedience, Earthdog, nose work and tracking so Winston was used to a pretty active lifestyle. One of the exercises we used to help stimulate Winston’s mind and keep him busy was nose work. Nose work can be a low intensity activity that is perfect for dogs needing restricted activity. Nose work does not require much movement from the dog, the supplies are not too expensive and dogs love it. Nose work was a huge part of Winston’s ability to handle the downtime required for his recovery since it provided him an outlet for mental stimulation. Since using his nose is innate, Winston really loves nose work and finds the search very rewarding so using nose work in his recovery helped provide quality of life as well.

As soon as we got clearance to do more than just a potty break, I would put a hide at the end of our walk (and in the beginning it was only 20 ft or so), then mix it up a little with thresholds and multiples. We’d also do just a few containers while she was laying down so she didn’t have to move far. 3 weeks after the first surgery she did birch ORT,  and they couldn’t believe how well she did considering her status. 3 months after the second surgery she trialed in NW1 for the first time. No title but she was pronounced in 2 elements. Having to really think and plan hide placements for her limited mobility helped us be pretty creative too.

Figgy had six weeks of crate rest after herniating a disc in his neck. Nosework was the only extra activity that he could safely do after that. My trainer kept the hides low for him for quite a few weeks and if Figgy wanted to jump on and off low walls or ledges to follow the scent at a trial I asked the CO in the walk-through if it would be okay if I lifted him up and down and she asked the judge and he said that was okay

Oliver, my Glen of Imaal Terrier, will be 16 years old in 3 months.  He was diagnosed with complete Atrioventricular block last year and had a pacemaker implanted. The veterinary cardiologists did not want him to jump anymore so my Senior Barn Hunter had to retire. We were both depressed until I realized we could go back to the low impact sport of Nose Work. He had earned a NW1 title a few years ago but we moved on to other dog activities. It has been an amazing year and he has earned multiple NACSW titles (NW2, L1I, and L1V) in addition to a some class titles from the new Performance Scent Dogs organization. His energy level is high, life is fun again, and he looks forward to our trips in the car since we usually go to Nose Work trials, offsite scent classes, or any place mom can hide some tins so he can play 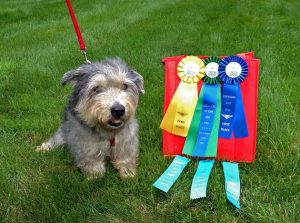 The stories are endless!  What’s great is that most owners get hooked on the sport and soon as they realize how much their dog loves scenting.  Nosework is a fun activity sweeping the world.   All over, dogs are learning how to search out target odors.  It’s easy and doesn’t require a lot of space or money to get involved.

When a dog starts to learn Nosework, he learns to search for a specific target essential oil (in the U.S. this is generally Birch) that is hidden amongst boxes.  One box will contain scented Qtips while the other boxes are free of odor.  Then progressively the dog learns to search indoors, outdoors, around vehicles, luggage and anything you can possibly imagine.  It not only satisfies the canine mind, it’s a competitive sport.  All over the world, people are starting to compete in timed events where their dogs hunt for odor in challenging new areas.  Dogs, who may have learned the sport while injured, are racking up prestigious titles and enjoying every minute of it.

Here’s Why, all healed, finding a tin with scented Qtips: 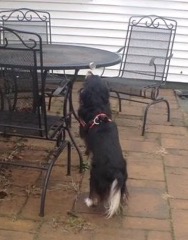 Scenting exercises the mind and is the perfect addition to most rehabilitation cases.  Make sure you your veterinarian or rehabilitation therapist if your dog is cleared for Nosework before you start training.

There are lots of ways to get involved but my favorite is by taking an online class with Fenzi Dog Sports Academy: www.fenzidogsportsacademy.com.  The first lessons are available for viewing online.