Nosework and the Fearful Dog

In Nosework as in all sports, state of mind is crucial to the dog’s ability to learn.  In fact as you train, you are developing a Conditioned Emotional Response (CER) based on the associations that the dog makes.  Nosework is a sport that is well applied to all personalities of dogs including fragile and fearful dogs…  but getting the most out of these dogs is a bit of an art with a whole lot of science thrown in. 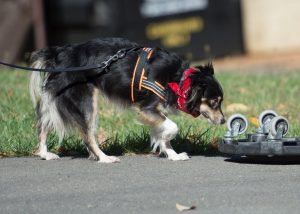 I’m going to state something a little controversial that many people might not like reading…  especially trainers.  Nosework IS for every dog however Nosework classes are NOT for every dog.  The reason is that although the work in the beginning is easy and rewarding, some dogs simply can’t be in a class environment without being fearful or over threshold.  For some dogs, learning Nosework might be best accomplished at home.  That doesn’t mean that the student can’t attend classes, and even use their time on the floor for relationship building, it means that for learning to take place and for a positive CER to be developed, the dog needs to be under threshold and free from fear.

Think of it this way.  If you were paid $10 every time you did a Math problem, you’d probably like Math!  Simple…  Math becomes your favorite thing in the world.  Now imagine that you get paid $10, even $20 for every Math problem but you have to do so while sitting in a closet full of spiders.  Now Math becomes something associated with spiders in addition to dollars.  Math is now scary because every time you try to do a problem you picture spiders crawling all over you.  This is what we do to dogs when we try to work them when they are scared.  Math is for everybody but you just want to make sure that you learn it without the closet of spiders.

This is one of the reasons why odor is not introduced initially when using the forward chaining process of hunting for food.  It makes complete sense and it works.  It’s also the reason why online education and training is SO EFFECTIVE with fearful dogs.  In the case of online education the closet of spiders is removed entirely because the dog is working in the safety of his own home while he develops a positive CER to odor.  Because I teach both online and in person I’m able to see the transformations made by both groups.

Like every instructor, I do get the fearful ones coming to class occasionally.  After all this IS the right sport for them and it DOES create confidence.  So what do I do?  Well, I focus on removing the closet of spiders while working on Math at home.  I had one dog recently come to one of my classes who was so afraid to be there that she wouldn’t take food from her owner.  So although the other students worked their dogs on the initial games, I had this dog’s owner work on his dog’s emotional state.  We were able to make a breakthrough by tossing pieces of hotdog.  I gave him homework to work on the games that we played in class at home.  The next week she was a little better.  A few weeks later, she had not only caught up with the class but she excelled.  This dog continues to show real love for the game and in the process her relationship with her owner is also strengthening.  Had I pushed her owner into working her in class, I don’t think she would have been successful and both would have given up the sport.

My own Miniature American Shepherd, Why, is a fearful dog.  He literally MUST learn a new behavior at home.  This goes for all sports for him, not just Nosework.   In the past, in a class setting he would shut down and all learning would cease.  I removed him from in class training for quite some time because it simply was not helping him.  About a year ago I decided to teach him Nosework.  He flourished at home.  Then I carefully took the behavior on the road and started his generalization process.  I’m happy to say that he is now prepping for NW2 and happily and confidently takes Nosework classes locally.  He loves this sport!  That’s not to say that is no longer environmental…  he probably always will be, but he has a positive CER association with Nosework and can usually overcome his environment.

One of the most beautiful parts of this sport is how it develops confidence.  It’s not really just a by product of sniffing, although that is a part of it…  it’s because confident and successful searches are built up over time and the dog literally learns that he can conquer his environment.  It truly is an empowering sport!