Nosework: A Ray of Hope for Dogs with CCD

Canine Cognitive Dysfunction (CCD) is a form of dementia that our dogs may develop as they age.  It’s similar to Alzheimer’s in humans.  It affects memory, cognition, awareness and judgment.  When CCD onsets it changes the physical and chemical attributes of the brain. 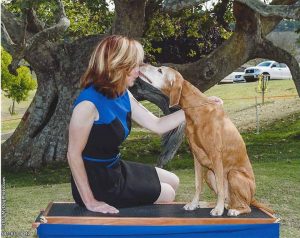 According to the Pet Health Network: (http://www.pethealthnetwork.com/dog-health/dog-diseases-conditions-a-z/canine-cognitive-disorder), the most common signs of CCD are:

The result is diminished quality of life which can be painful for the owner to witness.  There are medications that help but often mental stimulation can be a powerful component of treatment that can ultimately help extend quality of life in these senior dogs.

This Spring I had the opportunity to work with a dog with CCD.  At the point that we started Nosework, Gabby’s cognition was fairly poor.  Her owner, Colleen, thought that she might be able to enjoy a little Nosework as a potential enrichment activity.  Gabby has advanced CCD and her vet was not optimistic.

Keep in mind that scenting uses up to about 20% of the canine brain.  This is the reason why dogs are mentally fatigued by Nosework much more quickly than in doing other sports.  Processing olfaction in the olfactory lobe takes concentration and thought.  This is one of the reasons why Nosework is an ideal way to take the edge off of a high energy dog!  In the case of Gabby, although she is a Senior, she is a Viszla and throughout her life enjoyed energetic activites.  Nosework not only helped her work through cognitive puzzles but it also satisfied physical needs inherent in her breed.

I teach Nosework at the Fenzi Dog Sports Academy (FDSA) and follow a certain protocol based on the combination of both operant and classical conditioning…  meaning the dog learns the cause and effect of searching for and targeting odor as a means to receive a primary reward (usually food).  At the same time the dog develops a positive Conditioned Emotional Response (CER) to odor, meaning when he/she scents odor, a positive feeling is produced and therefore a positive feeling about searching for odor is produced.  (Please note that there are MANY ways to teach Nosework, all of which work and all of which would have worked for Gabby.)  In teaching Gabby, we altered a few of the exercises to make the games a bit easier and to control her frustration levels.  As a side effect to Gabby’s CCD, she has a decreased tolerance to frustration.  We needed to make the exercises straightforward and clear for Gabby.

One of the things we changed was that Colleen started to feed Gabby in the presence of Birch, her target odor.  This provided Classical Conditioning and associated scent with good things to come.

The other exercises which are more Operant in nature (meaning they require choice), encouraged Gabby to think.  With the FDSA method, the dog learns to place their nose on the tin in order to be fed a cookie.  This is a choice game that stimulates thinking in addition to associating odor with good things.  We went VERY slowly with Gabby.

When it came time to start choosing between boxes in order to identify the one with odor, we realized that Gabby wasn’t seeing the boxes.  In general I’ve found that dogs initially search using a combination of eyes and nose because we condition them to search objects.  Over time, with the normal Nosework dog, the dog learns to trust his nose over his eyes (although some dogs do this more naturally).  I’ve seen this tendency with dogs regardless of the method in which they were introduced to odor.  This tendency is strongest in visually orienting breeds such as some herding bred dogs versus dogs that have been bred strongly for their olfactory abilities, e.g., some sporting bred dogs and scent hounds.  With Gabby, although she is a naturally scent oriented breed, she was struggling with CCD and was relying on her eyesight more than she would have had she been younger.  Our approach was to raise the boxes to put them about 10” to 12” off of the ground.  This helped tremendously.

Another alteration was to really focus on her mental state before releasing her to search boxes.  We found that calming her with petting helped to reduce her arousal levels and thus reduce her frustration barking.  It’s helpful to note that Gabby has always resorted to barking throughout her youth as well when her arousal level increased too much or when she felt frustration.  Her tendency to bark has increased with her age and onset of CCD.

At the end of the six weeks, Gabby had progressed through three weeks of material quite successfully!  We never had the expectation that she would be complete with the materials in six weeks and the fact that she progressed so quickly with the materials was amazing!!  She was hunting for her raised boxes and correctly identifying the box with the Birch odor.  More importantly, she was exhibiting excitement and JOY.

At the same time, Colleen started to notice changes in Gabby in between her practice sessions.  She was again starting to seek out attention and cuddle time with her family.  She had more interest in her toys and her overall symptoms started to decrease.

Then Colleen took Gabby to her vet for a checkup.  The vet told her without a doubt that she had never seen such an improvement in CCD with a dog and wanted to know immediately what she had been doing with her.  Gabby still has CCD but she has a new lease on life.  Her quality of life has improved dramatically and her CCD symptoms have lessened.  This is nearly entirely due to Gabby’s Nosework practice.  Nosework made a profound impact on the old girl’s life.  Gabby’s vet will now be suggesting Nosework to other owners of dogs with CCD in her practice.

If you have a dog with CCD or have a friend with a dog with CCD, consider Nosework!  Learning it is easy for both the dog and the handler.  You can either take an in person class or if that’s not feasible, look into online training.  An example lesson of the FDSA method can be found free at: http://www.fenzidogsportsacademy.com/index.php/sample-course