Now that I have a high drive dog with high arousal tendencies I’ve become a student of the Yerkes-Dodson Law.  Up until this point my dogs usually work on the left of the curve.  Now Brava works on the right.

The Yerkes-Dodson Law is the relationship between Arousal and Performance. As arousal increases, so does performance, until the optimum level of arousal is achieved.  At which time, additional increases in arousal cause performance to decrease.

When the dog is at the peak optimum level, we can consider the dog to be “In Drive”.  This is when the dog is able to tap into his natural drive and energy is focused and directed at performance.  At this point, FOCUS is at it’s peak. 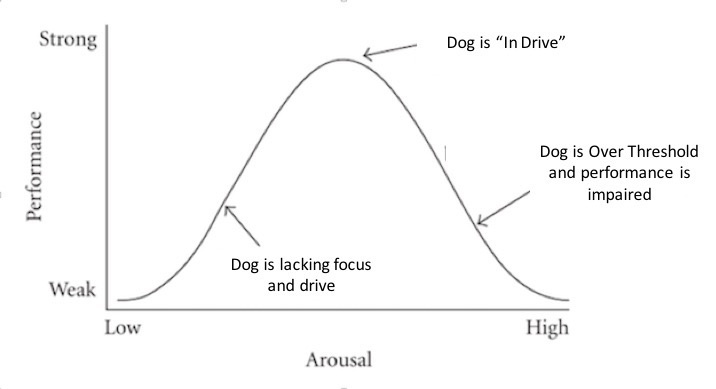 This all makes sense.  This curve however is mostly useful for the lower drive dogs, because in this case we are working to move the dog up the left of the curve and “pop the clutch” at the start line in order to work a dog that is In Drive.

So if we want to improve performance, we need to move these dogs to the left on the curve.  Sounds simple doesn’t it?

We can do this both in the moment (management) and by setting new habits (long-term impact).  Management can include reducing wait time and impulse control exercises.  What about long-term?  Long-term, sure we can do impulse control, but there is yet another tool in our toolbox…. easy work!  Yes, working these dogs on simple problems can create a habit of focus.  Let’s talk about why that is.

The arousal curve itself actually shifts left and right depending on the complexity of the task.  That’s a really important point.  Easier tasks can be done at higher levels of arousal than more difficult tasks.  They also have a way of reducing the dog’s overall anxiety which has an added effect of lowering arousal (think of arousal as a habit).  We can use this to our advantage.

Because novice searches, especially containers are a low complexity task, she was able to come into a search like this: 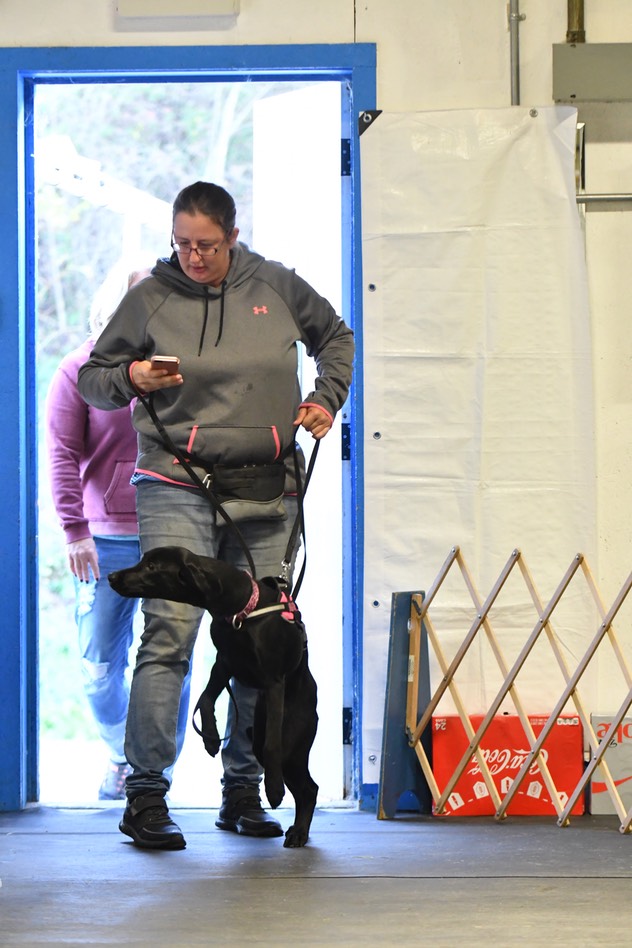 And it resulted in this:

This was possible because of the complexity of the task and her relative position on the arousal curve.  In this case she was slightly to the right of optimum however she was able to focus because the task wasn’t complicated. She was essentially “In Drive” for all intents and purposes.

This past weekend, we trialed again… in this case she had to wait longer in queue than she was really capable of.  Although the task was the same, her arousal was higher.  She was able to work and Q in all of her runs but she had fewer high placements.

IF however, the task was more complicated, BECAUSE SHE TENDS TO THE RIGHT ON THE CURVE, she would probably struggle with staying In Drive because her arousal would be too high to keep focused on a complicated task.

What we can take away from this is that FOCUS mirrors the performance aspect on the Yerkes-Dodson curve.  If you are having FOCUS issues, consider your dog’s arousal level!