Final Response or Not?

Do you need a Final Response? 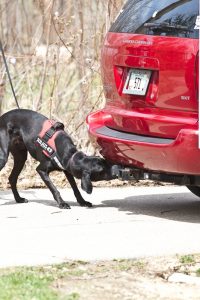 As instructors, we often ask our students, “Why didn’t you call Alert?”….  invariably the answer is “because he didn’t look at me” or “he didn’t sit” or something of the like.  Inside we are sitting on our hands either literally or figuratively yelling silently “CALL IT!!”

Why does this occur?

In my experience this is due to an over reliance on a final response.  So what IS a Final Response?  A Final Response is just simply the last piece of a behavior chain.  It’s the piece that gets rewarded the most.  The dog looks back, gets a cookie.  Or perhaps the dog freezes at source…  gets a cookie…  maybe the dog sits…  gets a cookie….  you get my drift?  The last part of the behavior chain can be either trained or simply just encouraged.  The trouble is, when there IS trouble, it’s the first thing to fall apart or dampen.  Alerts, because they are an overt, conscious behavior, dampen under stress.  And…  if they are not rewarded consistently or reinforced in some way, will start to degrade.  The simple act of searching for blind hides with a questioning or new handler is enough to generate variability in consistent reward.  Green dogs who believe that they have communicated source may simply give up and leave the hide which further compounds the problem.

So let’s talk about the behavior chain.  It encompasses 6 parts:

(5) The dog decides where source is (point of indication)

Interestingly, other than cueing the search, steps 2 through 5 are done without the handler in the picture.  The dog does them as a natural progression and without thought other than the thought of where source is located.  We put this behavior on cue but the dog performs these tasks naturally.  Then in step 6, the dog performs a conscious, overt behavior.  He has to think about it and perform it.  He essentially just did a Calculus problem in his head but in step 6 he has to figure out how to write that on the paper so that it can be turned in and graded.  And the crux of it is, handlers learn to RELY ON step 6.  Because Step 6 exists, handlers naturally tune out most of the other steps.

So what can we do differently?

We can stop the chain at Step 5.

I was in a lesson a few months ago when my own trainer told me that I call hides early.  I replied, “Too early?”.  She answered, “No, just early.”  After some more discussion I told her that Judd doesn’t have a final response and that I call the hides on the indication.  Her response was “No wonder you can call things fast.”

The result of calling hides on the indication rather than the alert is RELIABILITY….  Dogs understand what gets rewarded.  A final response is a conscious behavior and in frustration may be given at any point (false alert) in order to end the exercise and receive a cookie.  I call the hide on a subconscious activity.  If he indicates, I KNOW he’s at source (or as close as he can get to it).

So what if your dog already HAS a Final Response?

GREAT!  No seriously, that’s awesome…  you have a backup plan in case you don’t see the indication.  But what you CAN do is learn to really, and I mean REALLY, learn to read your dog.

So your next likely question is HOW…..  HOW do you learn to better read your dog…  that part is pretty easy actually.  VIDEO.  I mean it.  Get out your tripod or ask someone to record you….  or you can even hold the iPhone yourself!  Then upload the video to YouTube and watch it repeatedly on slow motion.  What you might see are minute changes of behavior that you might have missed in the heat of the moment.  A butt pivot, a head twist, sustained sniffing, etc…  maybe just even a stiffening or a quickening of the tail!

Learn to read your dog….  when you do, you will start to really embrace the phrase “Trust your dog”.

(Oh!  And always Breathe In, Breathe Out before calling Alert…  it helps to avoid a case of Blurt-Alert)