Do You Have a Box Smasher?

Let’s talk box smashing…. I’m not talking about socially responsible recycling; I’m talking about full out canine assault on odor boxes.  Does your dog make a mess in Containers?

Picture this…. You, the handler, stand on the start line for your Container search.  You see scads of white (or brown) boxes in front of you.  Your heart begins to race.  It’s racing because you don’t know what carnage will be had when your heavy footed canine partner is through.  You know you need to call Alert FAST but what if it’s fringe odor?  What if you get a No?  If you let him destroy the boxes then it’s probably a Fault.  You release your dog into the search area and all of that negative visualization DOES indeed result in a No…. And in the unnecessary death of a few boxes.

Does this sound familiar? 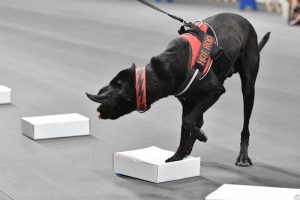 You have two choices to make.

(1) Do you ignore the behavior and take the Fault?  This might actually be the right answer for many teams.  Perhaps you have a very low drive dog and you’re happy with whatever they give you as long as it’s an Alert!  Or perhaps you’re at the point in your dog’s career where it just doesn’t make sense…. For example,  my dog, Judd, is a Box Smasher.  He’s also an Elite Champion (ELT-CH) and competing at the Master level in AKC.  Changing my criteria now may not make sense for him.

(2) Do you take the plunge and change the behavior?  Changing the behavior involves changing criteria and managing arousal states along with an element of being able to read your dog more effectively.

Ideally of course we train for a passive indication from the beginning!  However, retraining IS possible!

What if you have a less confident dog?  Here’s the good news…. Clarity begets Confidence.  If your dog truly understands what will result in a reward, his overall anxiety (and thus arousal) will subside to a degree.  By giving your dogs the decoder ring that unlocks the Reward Cookie from the handler, your dog has now become more autonomous and therefore, confident!

What do I mean by that?  Well picture a situation where you have a big project due at work which will result in a substantial increase to your annual bonus.  The trouble is that your boss has been extremely vague regarding what he actually WANTS as a result of the project.  How confident are you one this situation?  Likely not very.

Picture this also.  For most nosework dogs, they have started their careers interacting with boxes.  Whether that be eating food from them or using them as “game boxes”, playing the shell game.  Both approaches emphasize an arousal increase that can be due to the excitement of boxes as a contextual cue.  Let’s face it!  Boxes are FUN!!!  So are driving Corvettes although I wouldn’t put my nephew behind the wheel of one until he’s something like…. I don’t know…. 50???  Instead, my nephew would need a solid foundation in driving before trying out the Corvette.  For many drivers though, they wouldn’t get in trouble in a Corvette but for some they could easily smash it up.  Some dogs just are more inclined to smash boxes.

I make criteria very clear with the dog when I’m retraining (well I admit that I’m MUCH better now at doing this right in the first place!).  To help the dog, I step away from boxes until I have a behavior that is solid and fluent.  I use metal switch boxes with a mud ring screwed on.  I place odor inside the metal box and shape an indication.  This gives the dog a very big hint because it’s easy to encourage the dog to place his nose inside the metal box.  From here, we gradually transition to boxes and then build generalization skills. 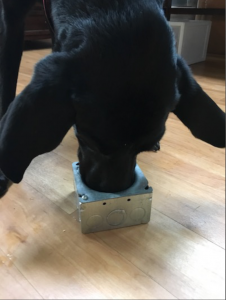 Smashing boxes CAN be fixed and you CAN avoid that Fault.  This method is extremely useful and effective.  If you’d like to try it but you need a little more handholding and detail, I’m teaching a class that starts on June 1 called Box Smashers Anonymous.  It’s an online class at Fenzi Dog Sports Academy.  Registration is OPEN! Click here for more information, including a helpful sample lecture!  https://fenzidogsportsacademy.com/index.php/courses/17695