Taking you and your dog to new heights!

About Stacy Barnett & Scentsabilities
About

Stacy Barnett is a top nosework competitor and trainer, being one of only a handful of teams with multiple Summit Level titles in the National Association of Canine Scent Work (NACSW), and the first handler to title multiple dogs, multiple times at the Summit level (Judd SMTx3, Brava SMTx2). Stacy has been a faculty member at Fenzi Dog Sports Academy since 2015 and is an international clinician for seminars around the world. She is a licensed Judge for for AKC Scent Work where she was also retained in an advisory position for the AKC Scent Work program for 2 years. Stacy is the author of the popular blog, Scentsabilities Nosework, and hosts weekly educational webinars.  Stacy also co-hosts the popular podcast, K9 Detection Collaborative with Robin Greubel and Crystal Wing.

With her degree in Chemical Engineering and her understanding of fluid flow dynamics, she has a deep understanding of odor movement. She believes in utilizing Scent Theory and odor to educate and craft the highly competitive nosework dog as well as bringing enrichment to dogs using Nosework as an activity to build confidence. She prides herself in being able to bring creative solutions to build odor obedience, confidence, drive, and motivation for the sport. Her mantra is CONFIDENCE, MOTIVATION, SKILLS and STAMINA.

Stacy’s approach to training goes beyond just setting Nosework hides. She takes an approach that cares for both the emotional and the cognitive aspects of the dog in order to help bring out the dog’s full potential. Her approach is not only reflected in her own dogs’ successes but also in her students. Stacy truly finds joy in tapping into a dog’s desire to search and to communicate with the handler.

Stacy loves helping others and her enthusiasm for the sport is contagious. Even greater than her love for the sport is her love of teaching. She prides herself on being a highly creative, enthusiastic and caring instructor, easily able to teach all levels of Nosework students. Stacy loves seeing teams flourish in the sport and enjoy what has become an extremely popular outlet for all dogs.

2nd dog to ever to achieve ELT3 in the Nation

Third Overall earning the title SMT (Summit Title) with Judd at the first Summit Trial in the Midwest in Sandwich IL.

Many HIT’s in NACSW, UKC, AKC, SDDA at all levels

Fifth Overall at the first Summit Trial in the country in Califon, NJ

Earned second Summit Title (SMTx2) with Judd in Kennebunkport, ME

Achieved Overall Pronounced at all levels NW1 through Elite. Twice at Elite! 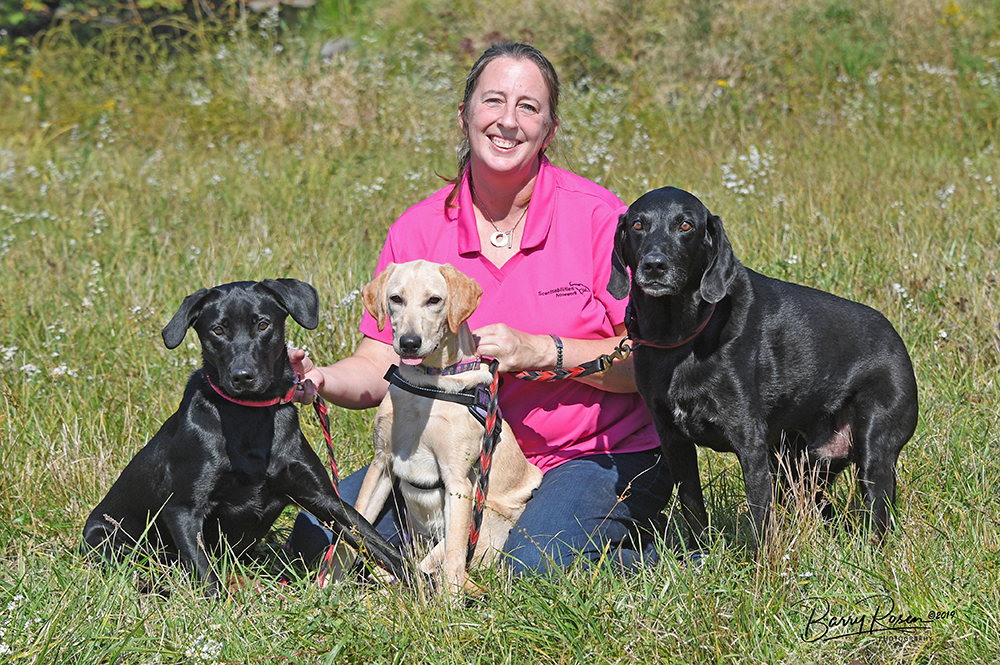 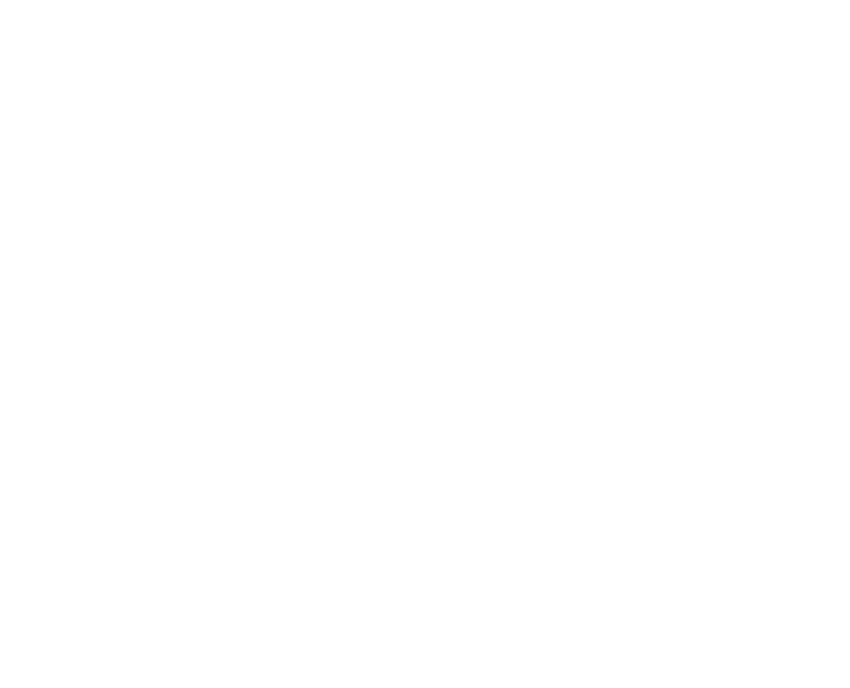 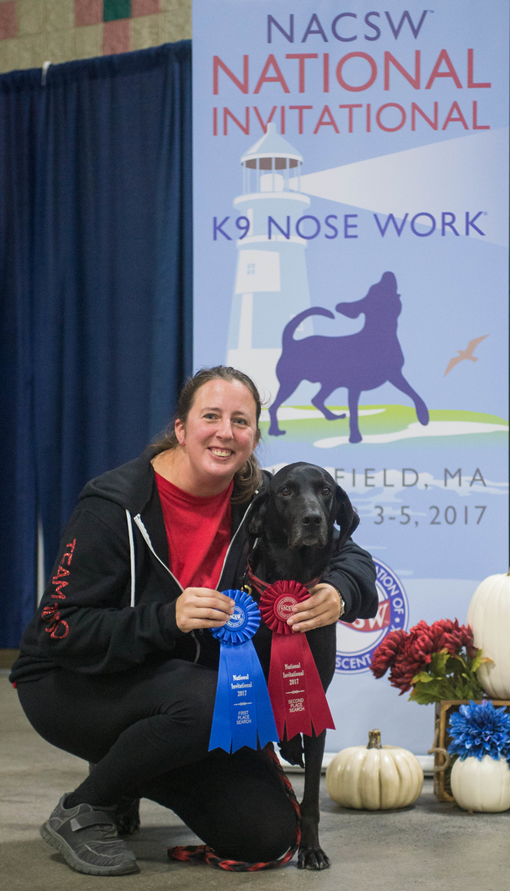 One of Stacy’s strengths in Nosework is trial preparation. She is able to evaluate the needs of the dog and develop a plan for setting the dog up for success.  She’s an experienced Nosework competitor and judge and knows what it takes to succeed in this exciting sport.  She is able to take her competitive experience and translate her success in a way that helps her students.

Stacy has trialed six of her own dog in Nosework…  dogs with a variety of drive levels and style of searching…  A little about her partners….

Judd came to Stacy as an urgent pull from a high kill gassing shelter…  together he and Stacy became bonded partners who ultimately carved their way into sport detection.  Judd himself was by nature a timid, soft dog and Stacy was able to transform him into a highly competitive Summit Level dog.  Stacy and Judd garnered many High in Trials in both the US and Canada. Together they competed in NACSW, AKC, and SDDA (Canada).

Stacy and Judd competed at the NACSW Summit Division Level where they were ranked among the top teams in the country, achieving 3 Summit Titles in only 4 trials…  placing in the Top 5 in every Summit Level trial that they competed in.  Stacy and Judd also competed successfully with placements at the 2017 NACSW National Invitational.

Judd placed in the top 3 overall at many Elite Division Trials. Judd was the second dog in the country to achieve ELT3 and the first Labrador to achieve Elite Champion (ELT-CH).  At the very first Summit trial in the US, Judd placed 5th place.  He then went on to earn his first official Summit Title (SMT) at the first Summit Trial in the Midwest with a Third Overall.  Judd earned his second Summit Title (SMTx2) in Kennebunkport, Maine and his third Summit Title (SMTx3) with a Second Overall in Montrose, Colorado!  Judd also has the distinction of earning Second Overall at the very first AKC trial at the 2018 Eukanuba Performance Games. Judd passed away on Nov 3, 2019 from complications due to cancer.

With Brava, Stacy crafted a high arousal, high drive puppy into a young, winning dog.  Brava debuted in NW3 in April 2019 and earned her first title with High In Trial and Overall Pronounced designation at the tender age of 2 years old!  2 weeks later, she earned her second pass in NW3. Brava completed her NW3 Elite in September 2019 with a perfect 3 for 3 passes – 3 trials, 3 titles!  Brava frequently scored over 90 with HIT and Overall placements in Elite. She has earned Overall Pronounced at the Elite level twice!  Brava earned her first Summit (SMT) title with a Second Overall when she only had her ELT3, and wrapped up her Elite career with her ELT-CH with Overall Pronounced. More recently, Brava earned her second Summit (SMTx2) title with a Second Overall. In addition to training in Nosework, Brava is also training for Conservation K9 work as a participant in a USDA Grant.

Powder, Brava’s half sister, hit the ground running and has helped Stacy to understand how to work a dog with very high working level drives. Powder, is promising to be a great search dog earning Overall Pronounced in her NW1, High in Trial in her NW2, and titled on her NW3 debut with a Second Overall. Powder has a lot of motor and sailed quickly through the lower levels quickly earning NW3 Elite.  Powder currently has her ELT2 and has placed in the top 3 in half of her Elite trials.

With Why, Stacy’s Miniature American Shepherd, Stacy has conquered much of his significant environmental issues.  When Why first started training, he couldn’t search 3 boxes in the front yard.  Why earned his NW2 with a Third Overall with Overall Pronounced designation and has recently earned his NW3 Elite title!

Stacy’s newest partner, Prize, is living up to her name.  Prize’s air scenting capabilities are reminiscent of Judd (though no relation) and she is showing incredible promise. Prize earned her NW2 with Overall Pronounced and then went on to debut in NW3 with a High in Trial!  Prize finished her NW3 Elite with another High in Trial in only 4 short trials.

With her Standard Poodle, Joey, Stacy learned how to build motivation in a lower drive dog with no appreciable food or toy drives — Joey earned Third Overall at his NW1, High in Trial at his NW2 and Third Overall in his NW3.  Joey passed away due to cancer at the age of 14. 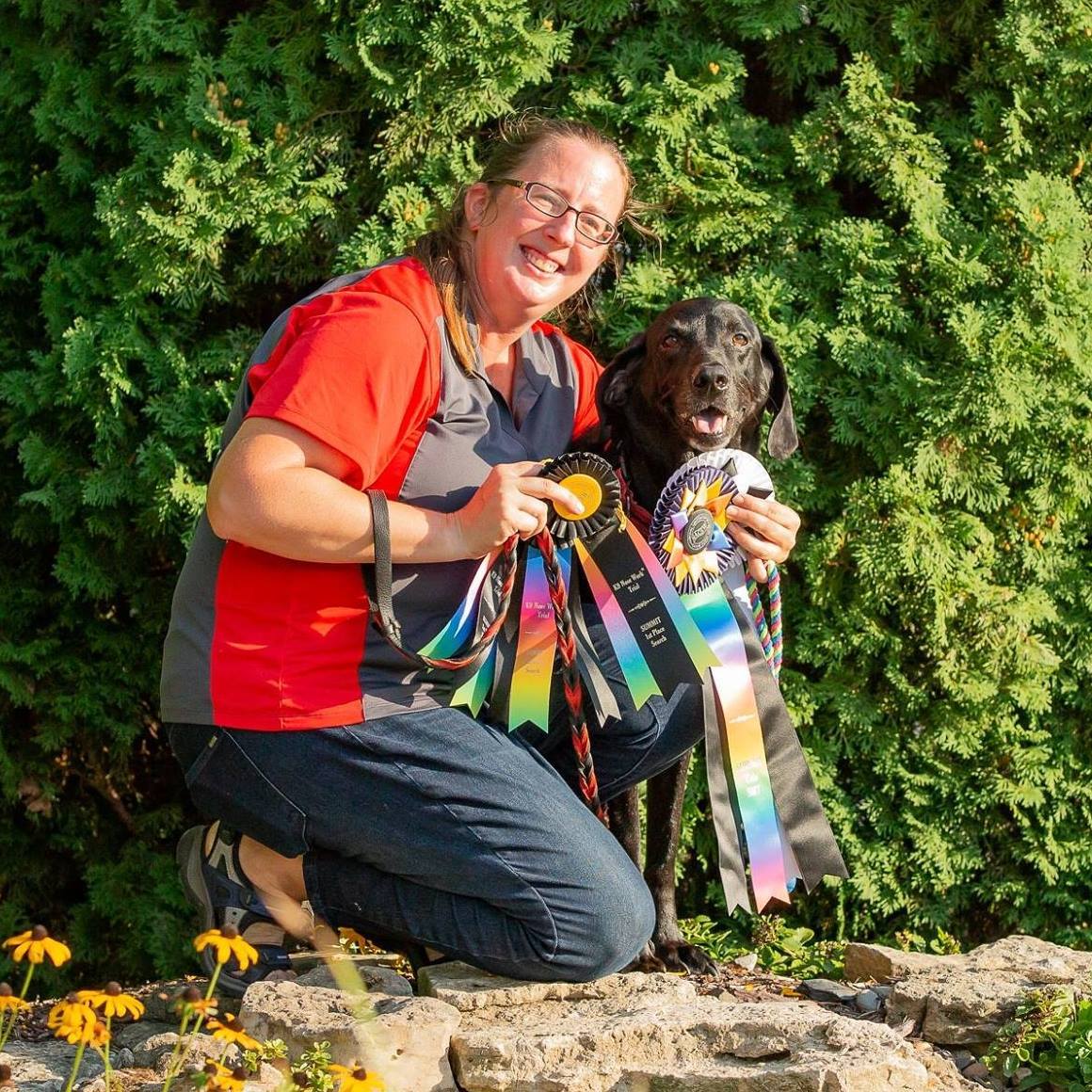 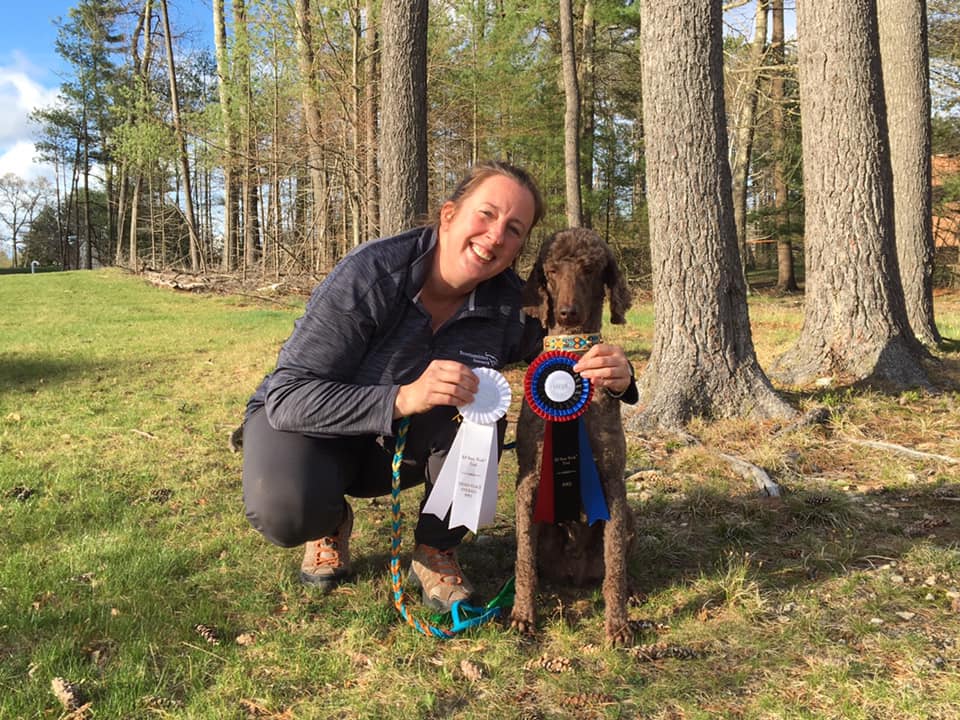 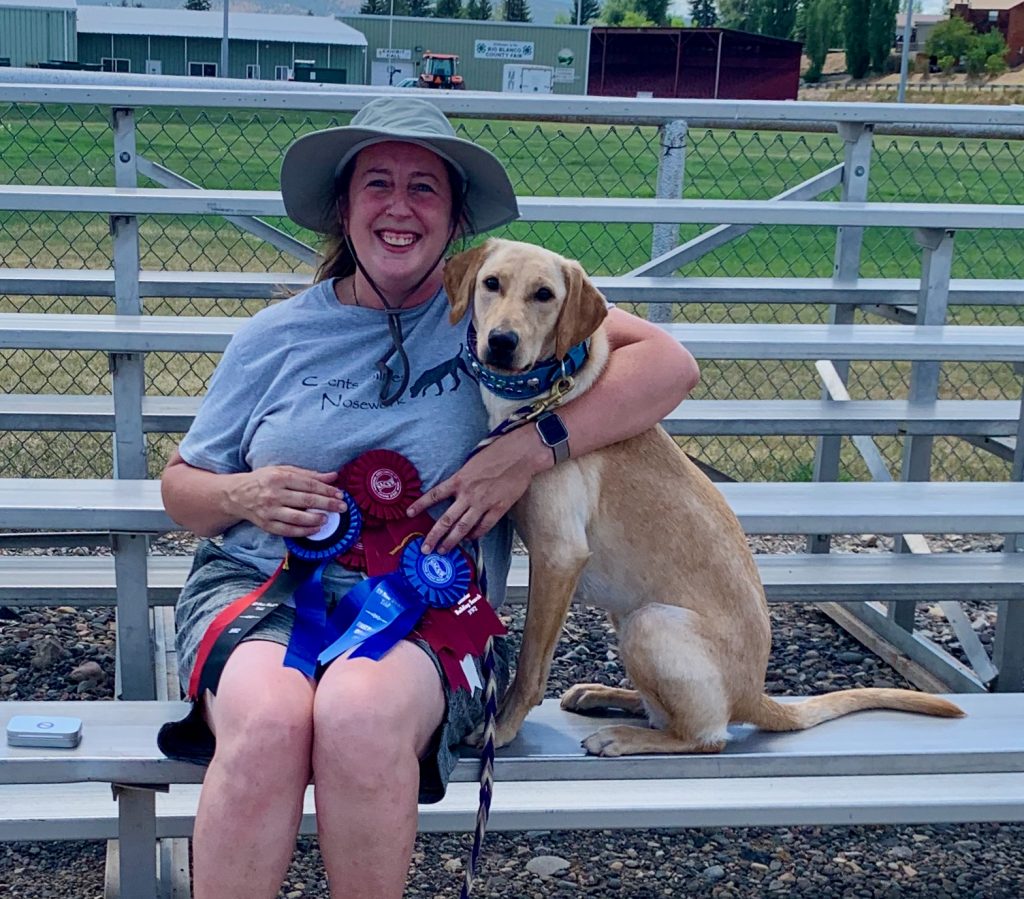 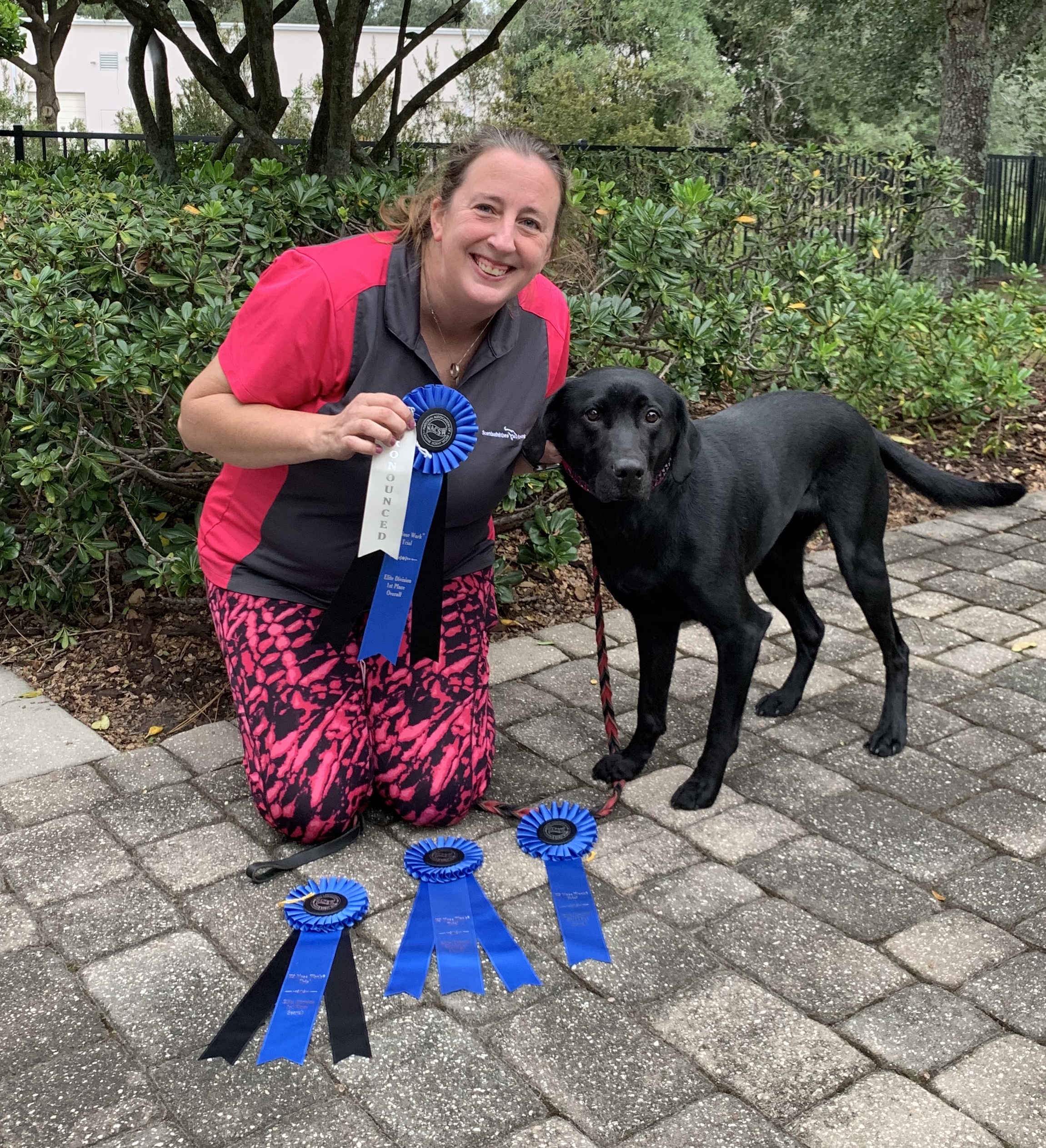 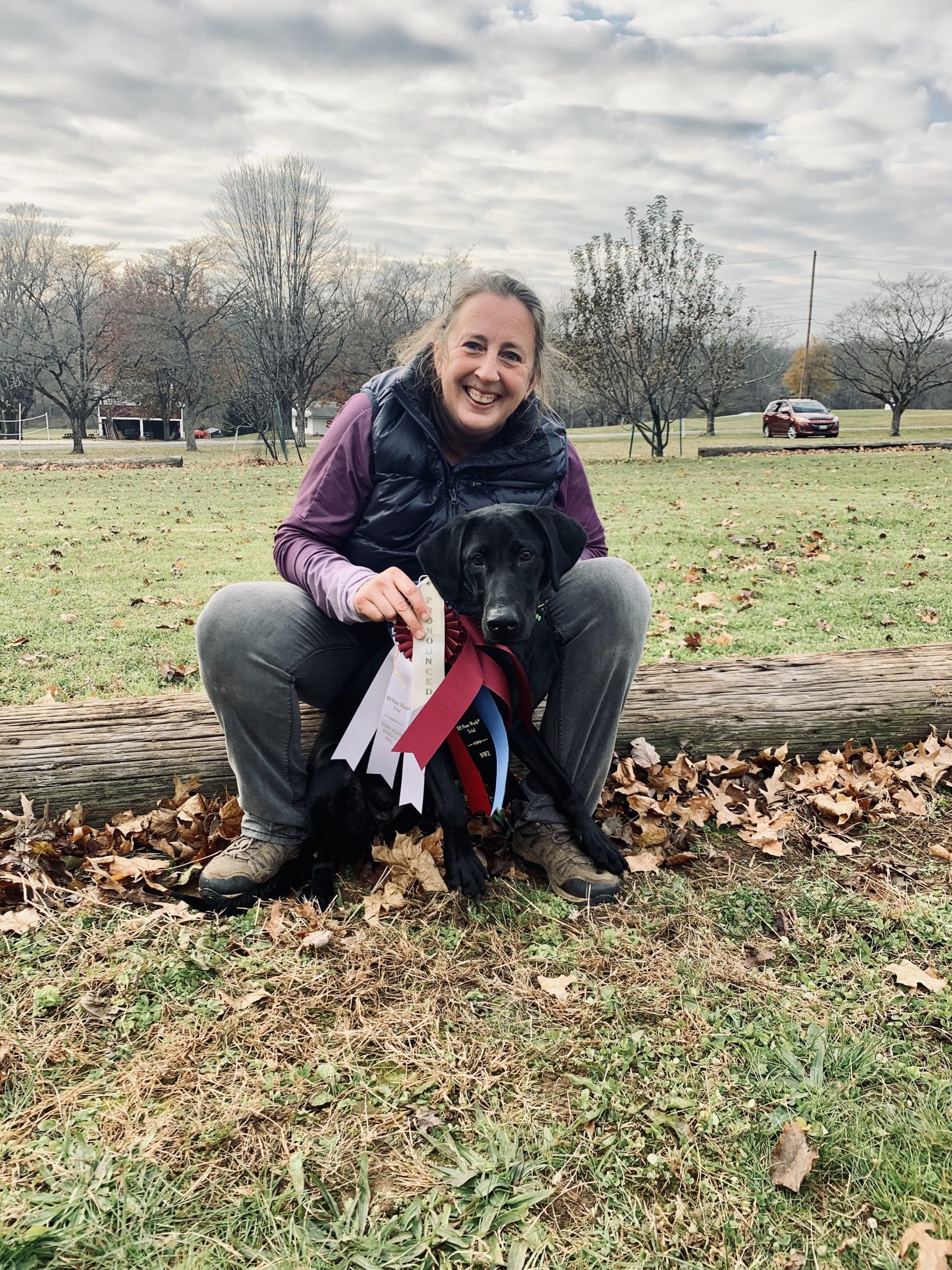 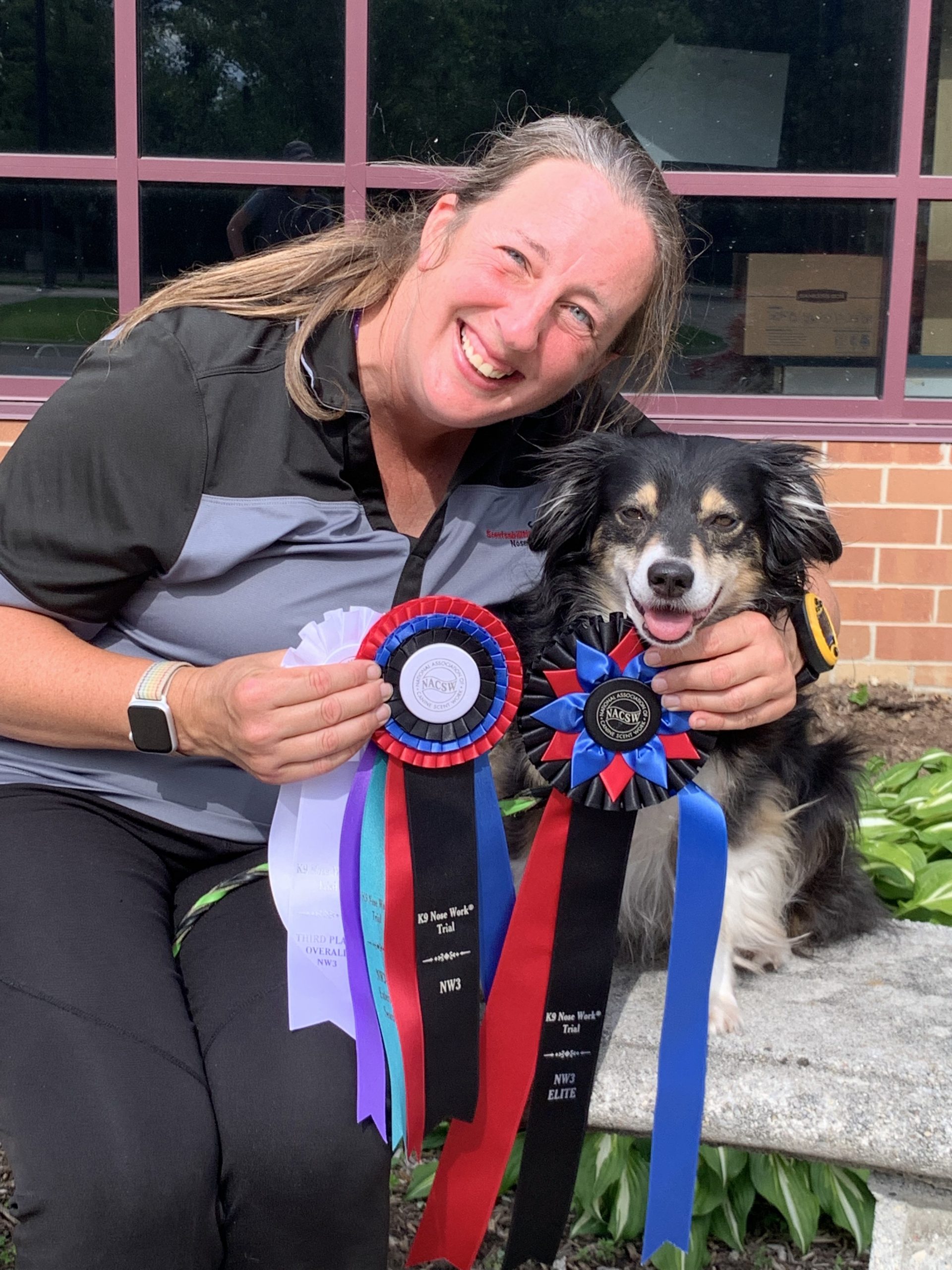 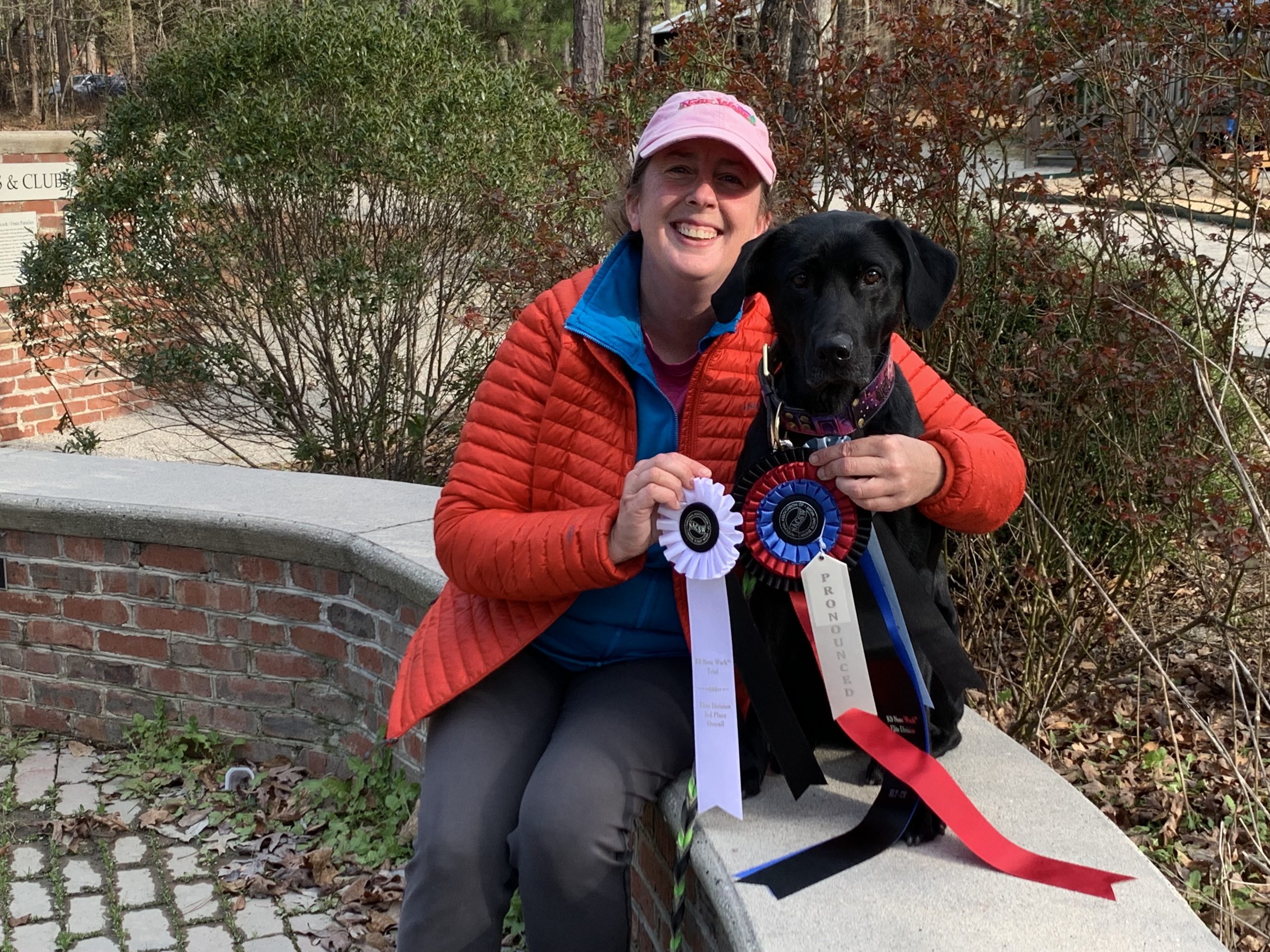 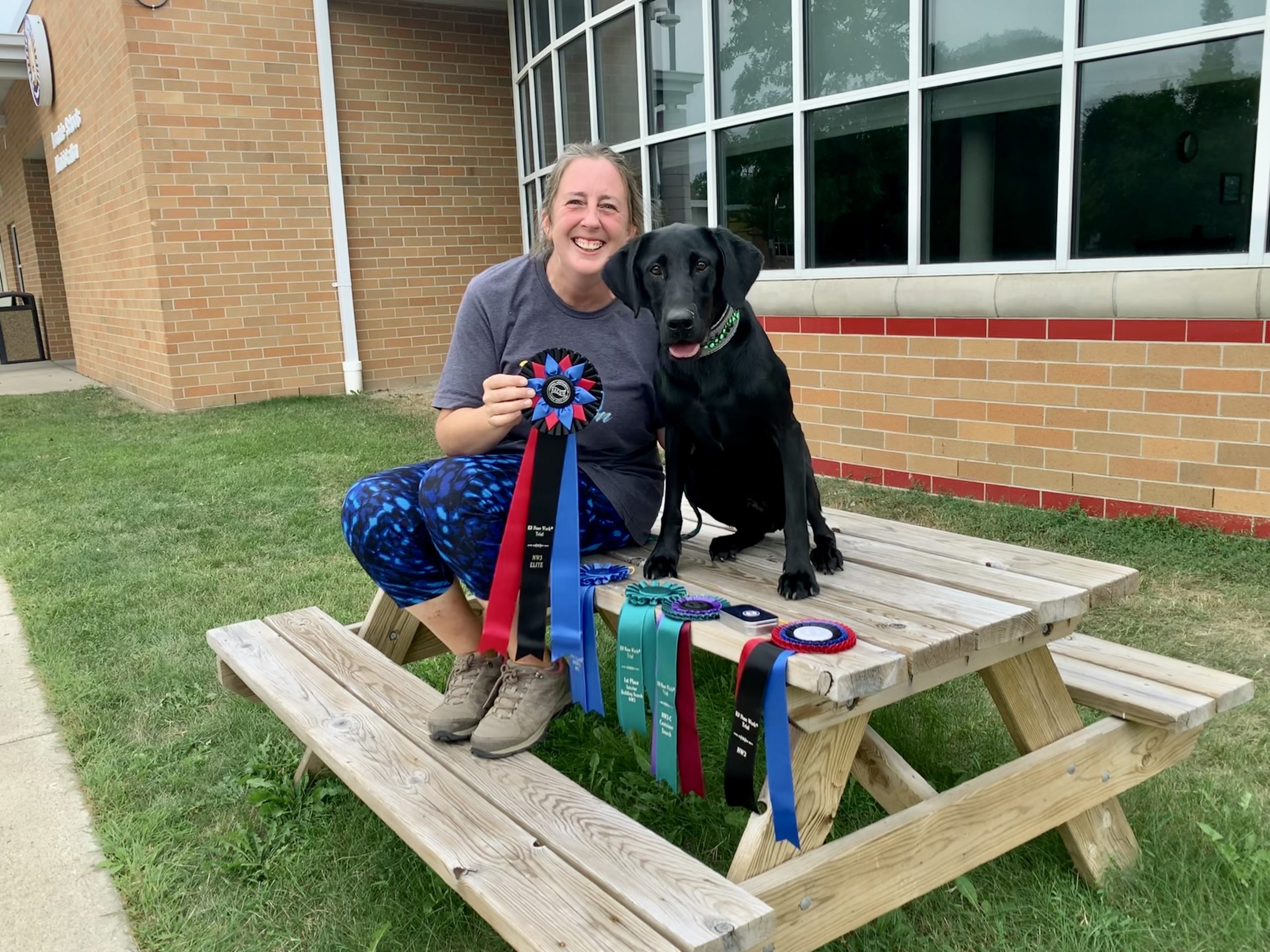 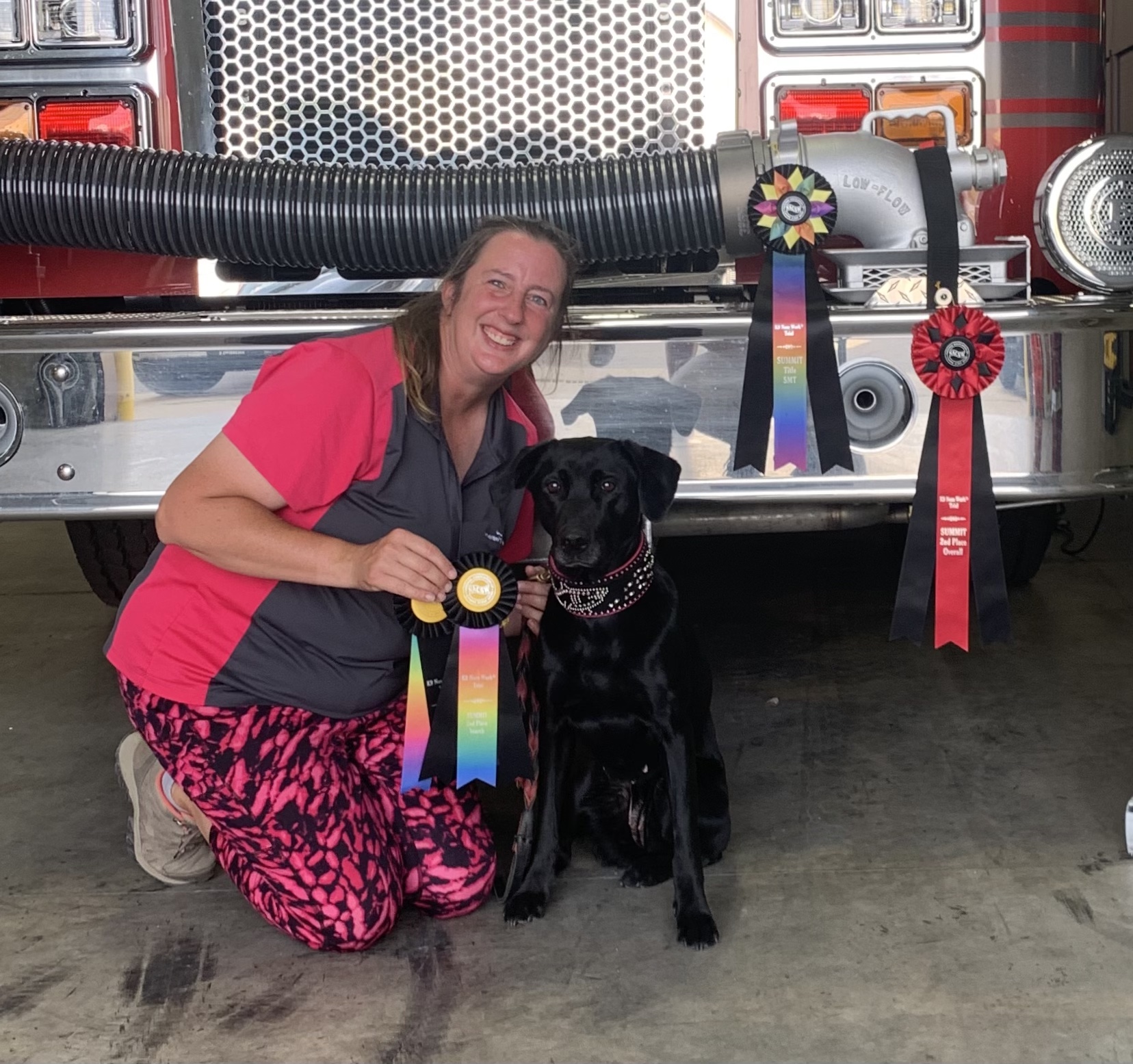 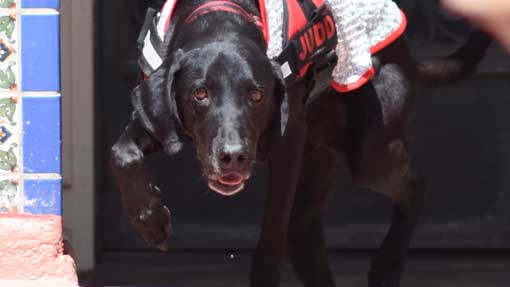 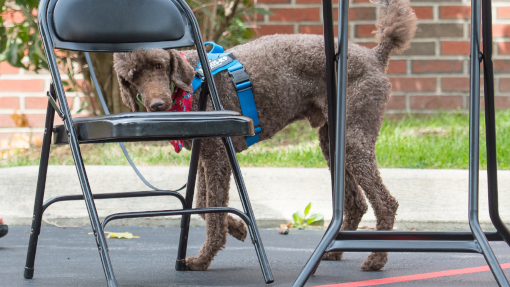 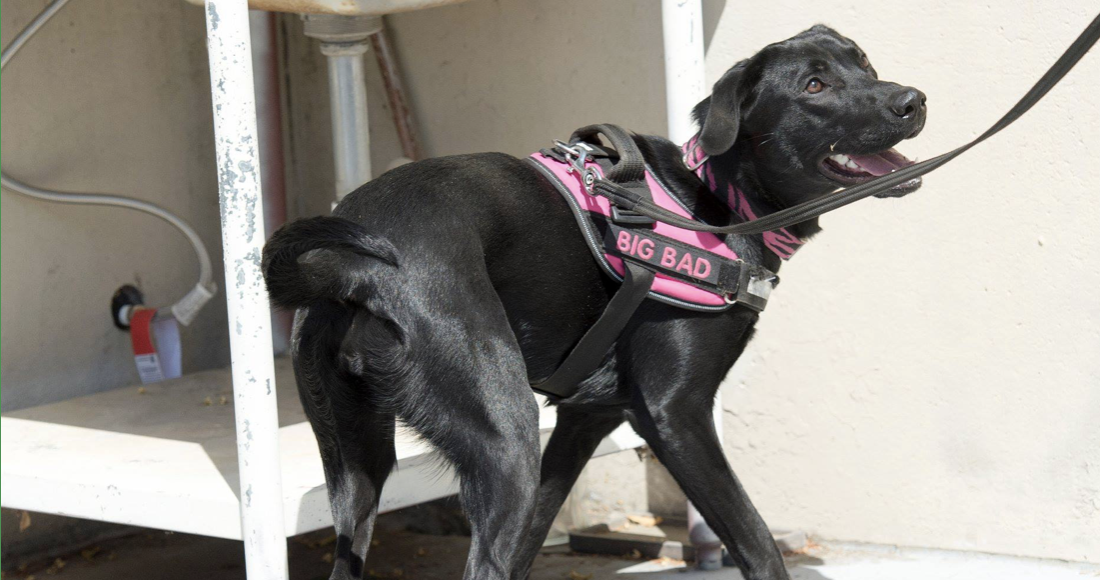 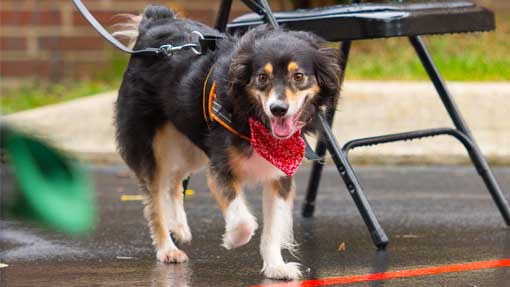 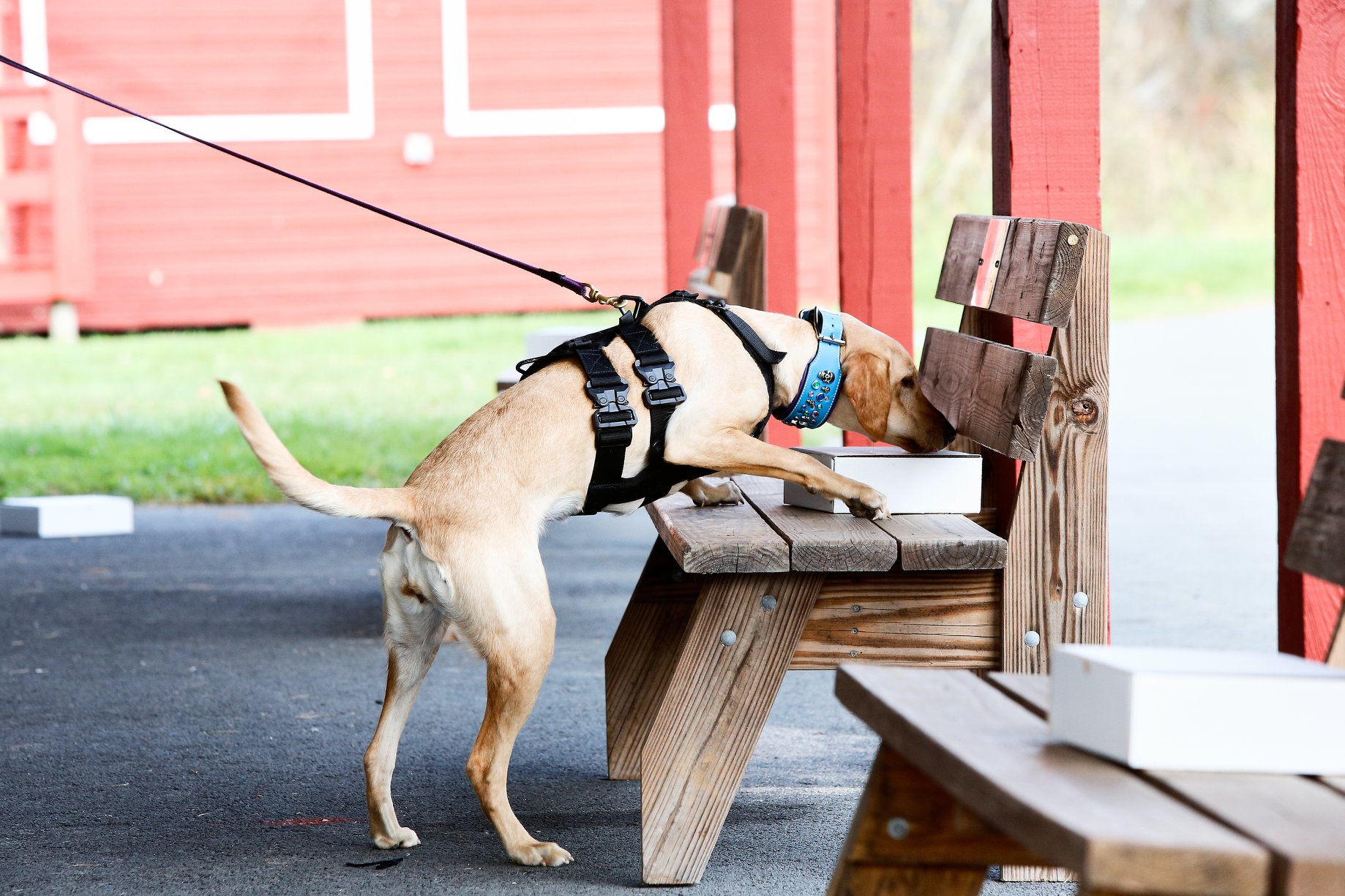 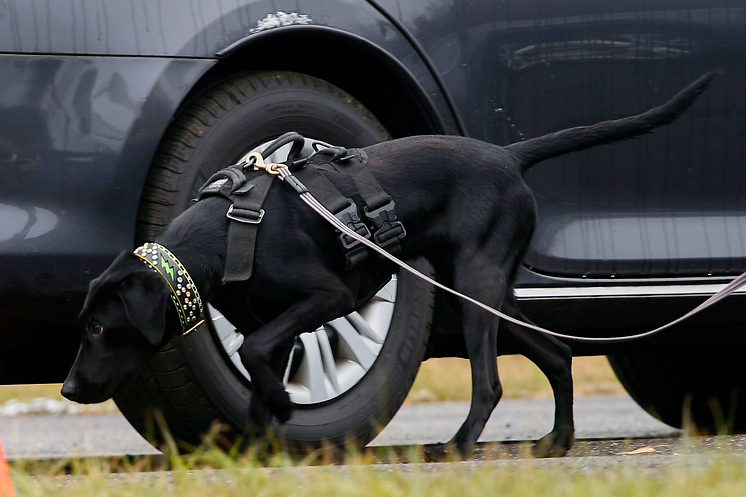 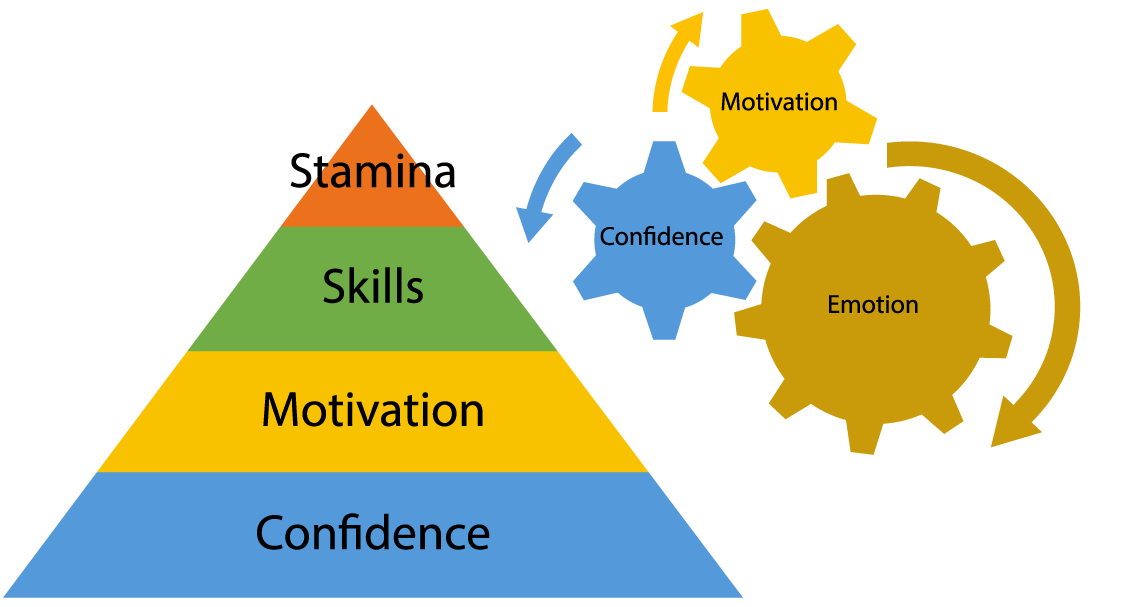 “Confidence and Motivation are the core to good foundations.  They are everything.”
— Stacy Barnett

Stacy structures everything around her Pyramid: The Four Cornerstones of Trial Preparation.  Confidence and Motivation are sacred. Emotions can be trained. Arousal is a habit. These are core concepts of what she teaches.
Z

Confidence forms the basis of the pyramid.  It’s what everything is built on.  A strong base provides a strong foundation.
Z

Motivation requires a desire for a task as well as the focus and ability to work in drive.  It goes hand in hand with Confidence.
Z

Stamina is the final component and is the result of careful conditioning, both mentally and physically.